Casey at the Bat

Walt Disney’s Casey at the Bat, 1946 is the cartoon version of baseball’s most enduring poem, Casey at the Bat by Ernest L. Thayer.   By the end of the Civil War, baseball cemented itself as the National Game.  On June 3, 1888, under the pen name of Phin,  Ernest L. Thayer published a baseball poem in the San Francisco Examiner, called Casey at the Bat.  Initially the poem received very little attention but that soon changed.  Archibald Gunter, a New Yorker saw the poem and saved it for future use.  A few weeks later Gunter saw another article about a performance of the poem by the comedic actor De Wolf Hopper at the Wallack Theatre.  In August 1888, with New York and Chicago baseball players in attendance, for the recital of the poem by the famed comedian, the poem and its legendary history took on a life of its own.  The poem became perhaps the most famous recited poem in American History (https://www.americanheritage.com/content/casey-bat).

Fast forward to 2013 and in Cooperstown a little over two months after I had gotten married to my beautiful wife Susan, I attended my first academic conference held at the National Baseball Hall of Fame.  I had been selected to make my first presentation at the 25th annual Cooperstown Symposium on Baseball and American Culture.  The keynote speaker for the event was long time sports writer Frank Deford.  The author of “Casey on the Loose: What Really Might Have Happened,” told us that he did not think Casey should come down through history simply as a buffoon who swung and missed at the final pitch in Mudville that day.  He told us, “I never saw him that way, “I saw him as a heroic figure. He just had one bad at bat. He was waiting for his pitch.”  Here is the write up about Deford’s opening remarks to those of us in attendance at the symposium (http://www.coopercrier.com/sports/local_sports/deford-gives-keynote-for-baseball-symposium/article_69f3622c-adb6-5ab0-aef3-b6f61b7cda30.html.)

Later on that week, I got to meet Casey.  Well, the 2013 rendition of Casey at the Bat by Tim Wiles, who also served as the director of research at the Hall of Fame in Cooperstown. 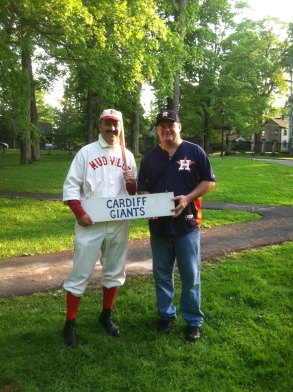 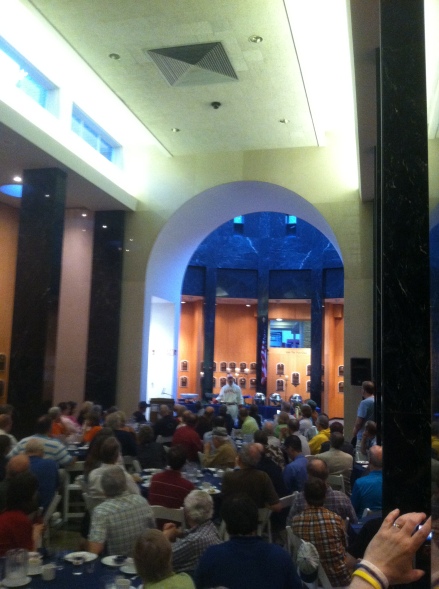 I decided after that weekend that I would incorporate Thayer’s famous poem about Casey into my US History survey course lectures that I teach at the University of Houston.  The easiest way to do it I have found is to add some media to the lecture.  I decided on Walt Disney’s 1946 cartoon.  The short cartoon which I will link to here is the same cartoon that I show at the end of every semester when teaching the first half of the US History Survey Course.  I hope you enjoy it.

As a side note, I have added this same post to my baseball page located in the baseball link above.

The Society for American Baseball Research

Serving Central and South Texas Since 2006

The story of the Houston Astros. Yesterday. Today. Tomorrow. Everyday is a new entry.

North of the Bayou

A Personal Blog by Joe, Spinner of Yarns